Tim Cole, Professor of Social History at Bristol University, speaking on Beyond Auschwitz: exploring the meaning of local landscapes in the evolution of the Holocaust.

Tim begins with the famous spot in Auschwitz where the rail line branches close to the gates. This was completed in 1944 for the deportation of the Hungarian Jews and has become an iconic vision of the Holocaust.

There’s a spatio-temporal dynamism to the genocide – it moves across the European continent as time passes. Where does it begin? Tim begins with the German occupation of Poland. He shares a map of the Jewish ghettos of Eastern Europe 1941-42. 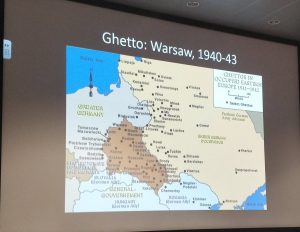 Tim makes the point that ghettoisation is about letting Jewish people know their place in the Third Reich, as lesser people. He shares the story of Janina Bauman (Winter in the Morning), whose family lived in Warsaw. She was fearful of hiding on the Aryan side of Warsaw, since she felt she looked too Jewish, so her family decided to move into the ghetto in the autumn of 1940. It’s difficult, with the knowledge that the Warsaw Jewish community were deported to Treblinka in 1942, to understand why they would take such a decision: but with the knowledge the Baumans had in 1940, this seemed like the safest decision.

The ghetto was kind of OK, felt Janina. ‘Different, thus exciting.’ This does not fit with a photograph taken from the end of a railway line in Auschwitz. Life could continue in the streets where you had previously lived: there remained a sense of normality. However, the ghetto changed quickly, and by 1941 typhus was rife and the death rate peaked.

At this point, the genocide shifts east, into former Soviet territory. This plays out in intimate spaces around small, Jewish, village communities. Example: the Greif family. One daughter, Reizel, a member of the Communist youth, fled east, deciding that the Nazis would not be kind to people of her politics. The rest stayed put – again, a decision based on places of relative safety. The mother and the younger daughter were shot into a ditch in the woods; the father and sons escaped and remained in the woods until the end of the war. The entire story of this family’s Holocaust experience took place in front of neighbours, within a few square miles of their home – no industrial extermination camps; no railway line.

Between 1942 and 1944, the European rail network became vital in moving victims to their killers, e.g. Greek Jews transported hundreds of miles north to be murdered at Auschwitz. These were meant to epitomise hyper-modernity, but for those on them they were the opposite: simply the story of two buckets. In one, rapidly diminishing water; in the other, soon overflowing sewage. The experience of the journey therefore became told through smell and emotion, narrowing in experiential terms to a tiny landscape. At this point the nature of the genocide shifted to an industrial scale, exemplified by Auschwitz and Treblinka. Auschwitz was a multilingual centre and this helped Jews who arrived there to understand the scale of the Holocaust, beginning to grasp that this wasn’t just happening to them and their community, but was happening across the whole continent. This, in turn, helps them to understand what might have happened to their missing family members.

Auschwitz was not just a death camp. True death camps, like Belzec and Sobibor, were tiny, since nobody ever stayed there: they were places of the dead and their possessions, which are shipped back to Germany. Auschwitz was huge and was a place for Jews who worked within the economy of the Third Reich; so in 1945, the camps became mobile through death marches and moved back towards Germany. In this third phase, killing goes from being industrialised to being personalised again: no barbed wire, but plenty of guards with rifles. Moving Jewish prisoners back to German soil meant that, for the first time, many Jews were entering Germany, and many Germans were seeing Jewish prisoners. They were sent to labour in bombed out cities in a country that was clearly on the brink of defeat, and have to decide whether to stay with the relative safety of the death march or attempt an escape. A series of camps was created in Germany to deal with the prisoners, e.g. Bergen-Belsen – these camps became horribly overcrowded. No active killing was going on, but they weren’t being fed, since they were no longer required for the economy. The camp where nobody was in charge was worse than the camp where the Nazis were in charge: everything was conspiring against survival.

After liberation, thousands of Jews pressed east to try to get home. Often they found no trace of their families and hostile receptions from their non-Jewish neighbours, so many then travelled back west to the displaced persons camps in Germany and, from their, emigrating to Israel, the UK the USA, Canada and Australia.

So, what is our encounter with the genocide? It’s with the very end of it, in the post-genocidal spaces where death had taken over from all human agency. These camps were liberated by western forces – British troops at Bergen-Belsen, for example – and a lot of photographs and memoirs date from these events. The end of the Soviet Union and the opening up of new archives provided a different perspective – more forests, more bullets, more countries. We need to realign our understanding of the topic in line with the changing historiography.