We all have our preferred activities to use in the classroom. To help you keep your practice fresh as you plan the 50th revision session of the season or emerge from under that pile of coursework to teach KS3, here are some favourites from some of our regional advisers.

As many of my students know, one of my favourite T&L activities is to get them working with historians. Historical interpretations are quite complex, but having a basic process for approaching them can be very helpful in getting pupils to understand them more effectively. To take one example, I got my Year 10 pupils to compare and contrast how different historians had interpreted the causes of the First World War. The process is fairly straight-forward.
1) Pupils are given a set of historical interpretations in a group of four – if you are prepared you can get them to pre-read these for homework. If they are weaker you could group them first to have the same interpretations and then re-group them for the next stage. They each read their historian and underline the main points they are making about why the war broke out (in this instance). If you are using longer extracts, you may wish to get them to highlight the main points in one colour and any supplied evidence in another .
2) As a group they then take it 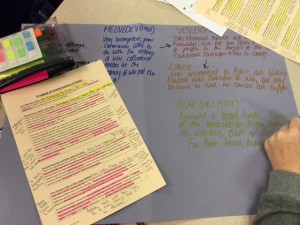 in turns to summarise the main views of their historian – these are recorded in four corners of  a sheet of sugar paper as bullet points. The pupils who are not speaking need to clarify what the historian thinks by asking questions. You could also get them to role-play this step if you want.
3) With all four (or more) views bulleted, pupils are asked to use post-it notes to support or challenge each interpretation. Green post-it notes are used to put supporting evidence from their studies against the historian’s view and pink post-it notes offer challenges. They can either use their existing topic knowledge (ideal) or you can use this as a point to bring in new topic knowledge.
4) At this point I get them to discuss which view they find most convincing, offering evidence for their choices. They may also wish to change their mind as they hear the evidence other pupils supply. As an extension you may want to provide more evidence at this point, for example 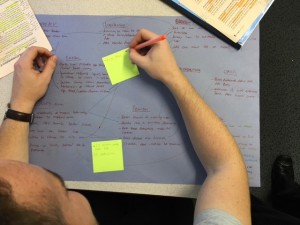 you may wish to hold back some key evidence and make pupils reconsider their first thoughts.
5) With older pupils, it is a goof idea to get them to find links between the historians’ views and physically draw these on the paper. For example, both AJP Taylor and Fritz Fischer agree that Germany played a major role in bring the war to a head, so they would link these two points on the paper and write “agree that Germany was k 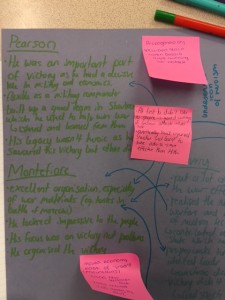 ey” on the line.
6) The last part of the task should be to get pupils to justify where their own views on the causes of war fit in terms of the historiography. For example they might say that they agree with Clarke that the war was driven by Serbian terrorism and expansionism because of the activities of the Black Hand Gang (and other evidence) and that they are less convinced by the thesis put forward by Fisher and Taylor for other developed reasons.

Although this can be a tough ask at times, I have done variations of this right down to Year 8 level and, with just two interpretations, to Year 7. With a bit of practice, pupils can really begin to get to grips with seeing interpretations as different ways of reading historical evidence. You can even begin talking about the issue of the evidence historians select.. As an extension for older students, I also ask them to consider why there may be differences between the interpretations, although this needs a lot more contextual teaching.

My current favourite activity to include in a lesson is a card sort on hexagons. The very shape of them invites students to tesselate them into patterns and this encourages them to make connections across ideas and think about developing multi-causal explanations. This works particularly well with GCSE revision: a particular favourite with my year 11s is the American West hexagons covering the problems faced by the homesteaders on the Plains; however, I have also been using them with my year 9s to interrogate the significance of World War Two battles, and my year 8s to encourage them to think about the causes of Victorian health problems. Year 8 worked particularly hard to see who could connect the most factors: this encouraged them to think laterally about the ways in which the causes linked to one another.

Card sorts sometimes get bad press, particularly ones that take a long time to prepare; however, the ability to arrange factors in hierarchies, match causes with consequences or create a timeline of an event are all extremely valuable activities in the history classroom that, in my experience, lead to better extended writing and a clearer understanding of the complex interplay among different factors.

All historical events derive, at least in part, from decisions taken by individuals or groups in particular circumstances. Decision-making activities are an excellent way for pupils to investigate the complexity of human motivation and address the fallacy of causal inevitability. Pupils enjoy them because ‘entering the minds’ of real people in the past helps to make History less remote to them. They can deepen their understanding of ‘how things happen’ by evaluating the courses of action which were open to people at the time.

Here is a ‘step-by-step’ guide to devising decision-making activities for your pupils: